We have two brand new members of the Thulani Program who tell me they are delighted to be here. 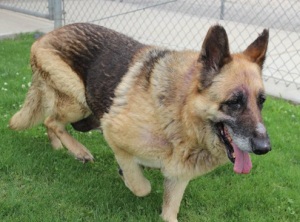 Darby T was obviously a breeder dog for slime-ball backyarder.  When she got old and developed cancer, well tough luck lady, its off to the stainless steel table in the Kern Co Shelter.  Carl S. in Sacramento took up her cause, and remembered seeing the story in the Sacramento local paper about the Thulani Program.  He posted Darby’s case on the GSRNC Facebook page, and contacted me asking whether we could help.  With logistics help from Karen P of Sonoma andtransport help from Kris, Darby arrived all ready to start the next and happier chapter of her life.

Darby loves people and loves to go for walks.  I don’t even have her on lead when i walk my property, she follows me everywhere.  She trotted back and forth, back and forth, while I as assembling the kennel run for Koby, always making sure that i was doing it correctly.  Today she got a bath and was a real trooper about it.  Will probably take one more to get her civilized, but she is MUCH better now.  She is an absolute love and a very gentle soul.  Darby is a real keeper.  Tuesday we go to the vet and get rid of that tumor.  Wish her luck!!!

Koby T was someone’s pet.  He is neutered and chipped, and is a happy, active, energetic 12 year old.  But he was dumped at the shelter with a request to PTS, but Thulani Program friend and stalwart in the LA basin found him at the East Valley shelter and evaluated him.  Don’t know how much evaluating was done because once a big old male gives Karen his paw, she melts like butter on a Los Angles August afternoon.  So Koby was bailed out and sent to the vet because he has a terrible case of diarrhea (diagnosed as IBD).  He also has the early stages of DM.  But that does not slow Koby down one bit.  He pulls me all over the yard, wanting to explore.  He loves to go for car rides, and he loves to be snuggled.  He is quite pushy about asking to be snuggled.  Koby also is enjoying his new life in Aroma, with lots of domestic and wild critters to yell at.

Koby also got his bath today (he will likely need at least two more before he is civilized) and he was a saint.  Stood there and took it all without complaint.  We got so much crap off him (literally) that he probably weighs 5 lbs less now.  But he was as gentle and polite as you could hope for.  Koby is here to stay, at least until we can find him his perfect permanent foster home. 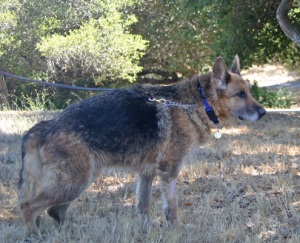 Posted on July 16, 2012, in Uncategorized. Bookmark the permalink. Leave a comment.