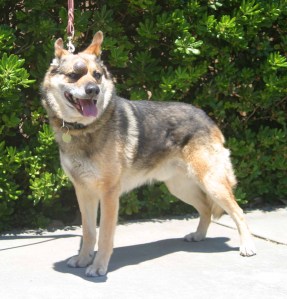 Reo was our first Thulani dog, rescued from the San Francisco ACC. You would be heartened by the number of shelter workers who came up to us when we rescued him, expressing their tearful appreciation for what we were doing. They also gave us all the shots and micro chip for free. He was a shelter favorite, but there was nothing they could do for him. The shelter could not put him up for adoption and the San Francisco SPCA had passed on him because of his medical condition described below. 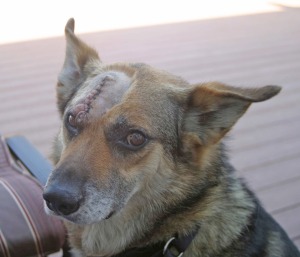 Reo was a wonderful 9 yr old dog that was great with people and dogs, and just wanted affection and a place to live. But he had a very large growth above his right eye, and nobody would touch him. The Thulani Program gave us the license to rescue him, and the tumor was removed by Dr Elneda Connors, Camino Real Pet Clinic, who donated half of the cost of the procedure. THE TUMOR WAS BENIGN!!!!! So Reo flunked out of the Thulani Program, was returned to the regular Rescue Program, and was immediately adopted by a man in Foster City who takes him on vacations to the Russian River. It doesn’t get much better than that.